"That 15 percent difference would go a long way toward creating opportunities and sustainability for women and girls," says Debbie Metcalf, president of Asheville NOW. "We have to ask who it serves to create circumstances intended to economically disenfranchise women during mid-career by limiting access to health care, including contraception."

Speakers will focus on an Equal Rights Amendment to the Constitution to stop codified legislative, legal, and economic discrimination on the basis of gender.

The announcement comes within days of the Supreme Court landmark cases of McCullen v. Coakley and Sebelius v. Hobby Lobby. The former ruling decreases the buffer zones between violent protesters and women exercising their right to safe, legal abortion, and the latter upholding corporation’s rights to make decisions about women’s private health care, including contraception. Under the Hobby Lobby ruling, corporations are granted rights as persons – rights not currently guaranteed to women themselves.

The rulings are a “Bitter Pill” for women to swallow both in western North Carolina and across the nation.

Today, women constitute more than half the U.S. work force and 52 percent of registered voters. One in three women also live and raise their families or retire in abject poverty, reported National Public Radio. In western North Carolina, like the state, 59 percent of women aged 16 and older are either employed or looking for work, according to recent figures from the Institute of Women’s Policy Research. The report for Asheville-Buncombe and Madison counties states that 73 percent of all women with dependent children work, and 25 percent of women in the area are single heads of households with dependent children.

Women in Buncombe and Madison counties earned only 85 cents for every dollar earned by men in 2012, the most recent year for which figures are available.

“That 15 percent difference would go a long way toward creating opportunities and sustainability for women and girls,” says Debbie Metcalf, president of Asheville NOW.

Women Are Not Equal Citizens:

The decision from the all-male majority, all-female dissenting Supreme Court is a blatant illustration of the reality that women are not equal citizens in the United States, say Asheville NOW women’s rights leaders.

“We have to ask who it serves to create circumstances intended to economically disenfranchise women during mid-career by limiting access to health care, including contraception,” Metcalf says.

“The Supreme Court’s decision increases the financial burden of health care on working women everywhere. As a working woman, I am aware we already pay 68 percent more in out of pocket costs than men for our health care,” Metcalf says.

“The court’s ruling will not have the same affect on men’s reproductive health care, as coverage will continue for vasectomies and Viagra,” she notes.

In 2013, the state’s openly anti-woman General Assembly packed inflammatory legislation into a motorcycle traffic bill, SB 353, which was signed into law July 29, 2013, in an attempt to legally erode women’s right to bodily autonomy when it comes to reproductive health. Opponents of the measure suggest state legislators have effectively turned back the clock on reproductive rights to pre-1963.

“It’s a 21st century family issue which should be as important to men today as it is to women,” Cummings says.

When contraception is not affordable or available to working women, it negatively impacts the family’s income for years. It also increases the likelihood that children and women over the age of 65 live in poverty, says Cummings.

Studies show women are more likely than men to cut back on employment when they are parents.

“Derailment of earning potential and a lack of adequate health coverage significantly and directly affect women in the present, increasing stress and economic difficulties,” says Cummings.

Therefore, the question of women’s health care, including contraception, is a human rights issue which affects each member of the family – not only women, she says.

Currently, the least expensive birth control alternative for women is about $300 per year for a generic pill, compared with about $1,000 out of pocket to receive newer, better options.

“Until women have the same level of control over their reproductive lives as men do, we are not fully American citizens,” Cummings says.

The “Bitter Pill Rally” of the Asheville Chapter of the National Organization for Women will be 7 p.m. Saturday, July 26, 2014, at Vance Memorial.

Learn more about the Asheville Chapter of the National Organization for Women:
http://ashevillenow.blogspot.com/.

News issued by: Asheville Chapter of the National Organization for Women 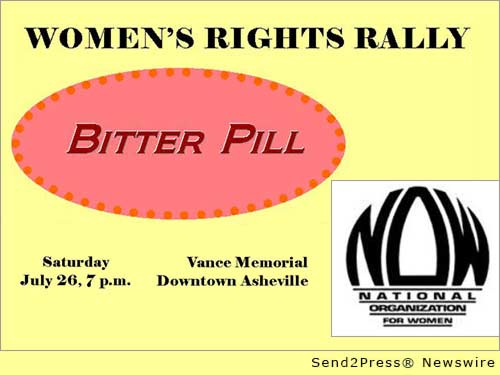 NEWS ARCHIVE NOTE: this archival news content, issued by the news source via Send2Press Newswire, was originally located in the Send2Press® 2004-2015 2.0 news platform and has been permanently converted/moved (and redirected) into our 3.0 platform. Also note the story “reads” counter (bottom of page) does not include any data prior to Oct. 30, 2016. This press release was originally published/issued: Tue, 15 Jul 2014 16:43:51 +0000

News Source: Asheville Chapter of the National Organization for Women

View More Asheville Business News
"That 15 percent difference would go a long way toward creating opportunities and sustainability for women and girls," says Debbie Metcalf, president of Asheville NOW. "We have to ask who it serves to create circumstances intended to economically disenfranchise women during mid-career by limiting access to health care, including contraception."

More from Asheville Chapter of the National Organization for Women

ABOUT THE NEWS SOURCE:
Asheville Chapter of the National Organization for Women

LEGAL NOTICE AND TERMS OF USE: The content of the above press release was provided by the “news source” Asheville Chapter of the National Organization for Women or authorized agency, who is solely responsible for its accuracy. Send2Press® is the originating wire service for this story and content is Copr. © Asheville Chapter of the National Organization for Women with newswire version Copr. © 2014 Send2Press (a service of Neotrope). All trademarks acknowledged. Information is believed accurate, as provided by news source or authorized agency, however is not guaranteed, and you assume all risk for use of any information found herein/hereupon.